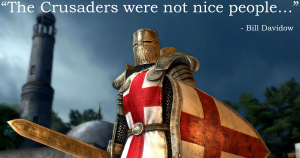 “The Crusaders were not nice people.”

This is my favorite line from one of my favorite marketing books, Marketing High Technology, by William Davidow.  As he goes on to explain in the book, “Total marketing is a crusade.”  His point is that truly great marketing requires total commitment.

I’ve always been drawn to the concept because it’s an easy way to express the passion involved in driving a product into the hands the customers who need it.   When he says the crusaders weren’t nice people, he means they had a “killer instinct.”  I’ve jumped on a desk and yelled to rev up sales people, I’ve played a tambourine in front of 300 customers, and I’ve embarrassed competitors in public forums (by being 10x better – hey, they should have shown up!). Maybe the words “killer instinct” are over the top, but as a friend and coworker once described it to me, “I speak in burlesque.”   The competition of high-tech marketing is fun, and a little “over the top” is great way to capture that fun.

Bill Davidow ran marketing for the first computer division of Hewlett Packard.  As fun trivia, he was put in charge of that group its first general manager, Tom Perkins (who later founded Kleiner Perkins — I like High-tech history, and yes, the one in the news lately).  From there, Davidow went on to run marketing for a small company you may have heard of called Intel.  His book, Marketing High Technology, is now an old one, but it still stands up, and I continually return to my notes.  So I thought I’d share:

1- “Without a channel, it’s not a product.”  –  It’s been my experience that to high tech product people, “place,” is the least sexy of the “four P’s.”  Unfortunately, it’s one of the most recurring and common mistakes in high tech.  It would seem that any company lucky enough to have a first hit eventually then hits this issue. The company is so successful selling product A that it decides it should acquire or build (or probably both) products B and C.  Massive investment is put into coding and or integration, and when it’s released it’s pushed on the sales force in a big push – “TADA! Now go sell it!”

“No hospital would order its staff of neurosurgeons to retrain for cardiac bypass surgery because it wanted to develop a new market yet the equivalent happens all the time to sales forces in business.”

Davidow’s point isn’t that sales channels should not be changed.  Instead what matters is that when planning, senior managers fully understand that it takes a very large investment of money and time to effect that change.  The product isn’t “DONE” until the channel is built as well (and that may in fact be a bigger job than coding the software!)

2– “A sales person’s most valuable resource is time” – Yes, blisteringly obvious, yet so blatantly abused and ignored by most high-tech marketing teams.  Sales is a difficult profession.  So much so that all other groups inside a high tech venture tend to hold it at arm’s length, even those who are tasked with helping them!

“One of the great maxims of business waste: There are never enough resources to do the job once at headquarters, but ten times as much energy can be wasted in the field and no one will bat an eyelash.” – Davidow

To the product management and marketing teams I’ve worked with I’m sure I’ve sounded like a broken record.  I repeatedly preach, “In a high tech company, everyone’s job is sales.” That doesn’t mean you need to pick up a bag and go on a call, but you should constantly be asking yourself what you’ve done lately to increase the time your sales people can spend in front of customers (or make that time more effective).

3- “The first step in selling a dog is to find a crusader!” –   Not every product is Facebook, the iPhone, or Salesforce.com.  Some actually need to be sold.

To be a “dog” product doesn’t mean the product is necessarily bad.  High tech markets are cruel.  We only need to go back to our Geoffry Moore to remember that over time all high tech markets settle into “First, Second, (sometimes) Third, and then…everything else.”  Frequently, sales of the “best” product, at least in terms of functionality that solves customer problems, can put them in the “dog” category. Starting late, bad marketing, and bad luck can all trip up good products.

All is not lost! (Maybe).  Sadly, not all organizations have the resources or the commitment to pull back and retrench, but it is possible to change position and to revive products.  As Davidow puts it:

“The first step in selling a dog is to find a crusader!  The second step is to reexamine the market. Try to find market segments where you can still win.  Narrow your focus.  Great marketing requires total commitment.  Total marketing is a crusade!”