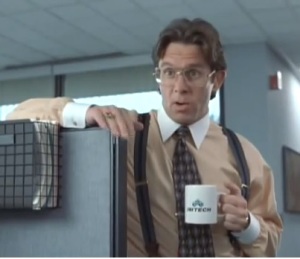 It used to be believed that the mass adoption of computers would mean the onset of what was always termed the “paperless office.”  With everything digitized, no one would need to print anything out anymore.  In fact, the exact opposite happened.  The increased information that came across all of the PC’s in the world created more and more things that people wanted to print out and save.  In 2009, the market for ink and toner cartridges was $30 Billion dollars (that doesn’t even count the paper or the printers).  Say what you will about the onslaught of eBooks, if the past thirty years are evidence, printing stuff out is here to stay.

The Problem: I’ve worked at various software and tech companies for some twenty years now, and pretty much every one has the same printer issue.  Sharing printers over a network is a great way to save costs, space, etc.  The problem arrives when you make the walk from your office down to the printer room.  When you get there, inevitable one or more co-workers are also standing at the printer, waiting for the outputs of their productivity.  Then starts the awkward dance of flipping through a printed out pile to reverse-shuffle out my print jobs from yours.  Perhaps you have one of those offices whose go-getter IT guys have turned on “header” pages.  This feature places a single page between jobs with some chopped off form of the name of the user in that weird ASCII plotting, “MDITSO.” If you’re lucky you won’t get back to your desk to find Janet-from-accounting’s recipe print out intertwined with your “TPS” reports.

Okay. I get it.  Not exactly solving world hunger here.  That’s not the point. The point is to take something that lots of printing products do anyway, and put in that extra little piece of functionality that makes it that much better or easier.  In this case, I think the idea is something that would allow the company or companies in question to open up a nice additional use case for their product.

A Solution: Listen up 3M or HP Printer division or Cannon and Xerox, this idea is free to you (you know, unless you want to cut me a small honorarium for selling all your stuff).  The ANSWER, of course, is sticky notes.   Ask anyone that comes into my office there are sticky notes tagged to everything upright – monitors, whiteboards, telephone, lamp, window.  The place where they’d really be useful are these stacks of printouts.

So if you haven’t already had the “aha” moment catch you, here is exactly how I think it should work.  Build a printer intended for the “shared network resource” market (offices, etc.).   In addition to filling the printer with reams of printer paper, pop a large stack of “yellow stickies” into a specially created holder/feeder/thingamajig (limit of my manufacturing lingo).  As each print finishes its run, the printer peels off the top sticky, prints the owner and title of the document (MDITSO – HuntingWOW Blog Post), and affixes it to the top of the print job.  Of course, the sticky overhangs the piece of paper so that it sticks out half an inch or so, providing an obvious, annotated separation from the next job.   When the next job runs through the same thing happens, but in this case the sticky is affixed one “sticky” length down.  In this way, multiple print jobs will have a cascading set of labels just like the tabs you find in the separators in a three ring binder.

I should patent this, huh?  Alas, we’ve switched from first-conceived to first-filed in this country, and I’m afraid this one falls outside my realm of passions.  Hopefully no one will actually make millions of licensing this one.  I guess there’s always bragging rights.

(This whole thing creates an interesting side-note.  Have you ever TRIED to get in touch with the product people at a particular company to suggest an improvement to their product?  I have tried this on multiple occasions.  With this idea to 3M and I believe I once tried to HP.  Also in recent months I reached out TUMI after the zipper pull on my briefcase ripped off the belt loop on my dress pants TWICE in two months.  It is BEWILDERING to me how hard it is to get in touch with Product people!   Inevitably, your best fall-back path is to submit your suggestion to tech support, thus dooming your good idea to the bottom of some trouble-ticket enhancement limbo.  There should be an “App” for that, or something…)